Morriston Boys' Choir (Pentrepoeth Boys School, Morriston), trained by Ivor Sims,  gave the first performance of Britten's  boys voices version of A Ceremony of Carols in London  1943. It was so successful that the composer himself asked Decca to record them. The performance is now available on the Pearl label.
Dr Nicholas Clark of the Britten-Pears Foundation recently contacted us regarding this performance and wrote: "We have a copy of the Morriston Choir version of A Ceremony of Carols and it is indeed the earliest recording of the work (and it was certainly the first broadcast). It is a very fine recording and I believe Britten was particularly fond of it." 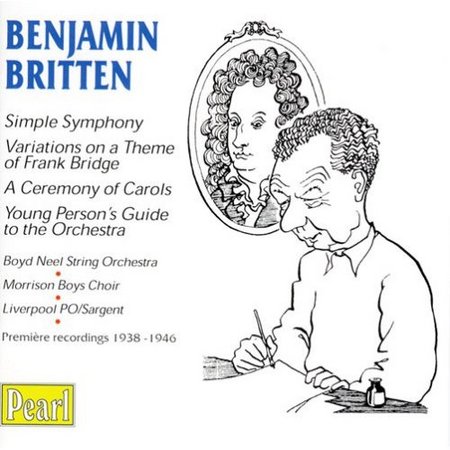 A Ceremony of Carols (op. 28) is a piece by Benjamin Britten scored for three-part treble chorus, solo voices, and harp. It consists of eleven movements, the texts of which came from "The English Galaxy of Shorter Poems", by Gerald Bullett; the text is in Middle English.
The piece was written in 1942 while Britten was at sea, going from the United States to England.
On Dec 4 1943 the final version of Britten’s Ceremony of Carols was sung by the Morriston Boys' Choir ( Musical Director Ivor E Sims) at London’s Wigmore Hall. Britten himself conducted the performance. Originally Britten conceived the work for women’s voices but on hearing the sound of the boys voices changed his mind!
Part of a BBC interview with Britten: “It wasn't written for soprano boys, but female sopranos. It was performed for the first time by The Fleet Street Choir, a female choir, in December 1942. After the première I changed my mind. The adapted version was sung by the Morriston Boys' Choir the following Christmas. I directed the final version myself, sung by the Morriston Boys' Choir and accompanied by harp by Maria Korchinska, at Wigmore Hall in London on December 4th 1943.”
In 1944 Decca recorded the Morriston Boys Choir singing the Ceremony of Carols. Maria Korchinska played the harp and Ivor Sims conducted. The composer, Britten, supervised the recording.