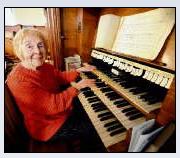 When Jennie Sims first settled down in front of the organ at her local chapel, no one-bar his family and friends had heard of Elvis Presley. Mention the Beatles and you would have been accused of misspelling the word for a group of insects. Although their musical styles had nothing in common, Jennie has seen them - and plenty of others - come and go.

That is not surprising when you have just celebrated your 90th birthday and, for two-thirds of your life, have been the resident organist at Salem Capel y Cwm in Bonymaen. And, quite rightly, both landmarks will be celebrated there tomorrow night at a special concert to honour not so much a stalwart, but an institution. Morriston Orpheus Choir and organist Huw Tregelles Williams are among those turning out at the free Cwm Chapel Road event at 7pm on January 18th, 2009. It was meant to be a secret, but it reached the one person who was meant to have remained out of the loop. And, as these things do, it happened by chance.

"I shouldn't have heard about it all until it happened, but I got to know about it quite inadvertently," said Jennie. "Someone spoke to me about it in the post office. She said: 'You are going to have the Morriston Orpheus playing for your birthday'. I told her that she must have got it wrong.

"But she said she had read it in the programme notes. I was quite astounded actually. I was taken aback. I thought that can't be right."

But it is, and is a worthy celebration of 60 years of service, which was preceded by years of practice on the same organ. She took to the instrument when she was around 14, having cut her musical teeth on the piano.

"I was always interested in the organ. Of course, in those days when you went to chapel you sang hymns and there was always an organist," said Jennie, from Winch Wen.

"It was quite an important position then. I was interested and I got to have piano lessons, first at nine or 10, and then organ lessons afterwards. That is always a good way to do it.

To many, the organ would seem a daunting avenue to go down.
"You don't think of the organ as powerful when you are young and trying to learn," she said. "You think you want to learn it and conquer it. Of course, the difficult bit is aligning your feet with your hands because they don't always go in the same direction. The strength comes from the stops you take out.

"You can produce a very soft sound, or an enormous sound. It gives you lots of qualities of tones. You can have strings, brass instruments and of course you have the added dimension of the pedal coming in. It can be quite dramatic because of the tremendous sound that you can generate just pulling out a stop." In those far-off early days, Jennie used to bound up the chapel stairs.

"Now I creak up," she said. "Then there were regular oratorios in each chapel, and both my parents took part, and my aunts and uncles. They were all part of the choir. That was their social activity then.

"Sunday was special then. It was a day when you put on your Sunday best. You didn't use those clothes on any other day. You kept them for Sunday. Of course Sunday is not considered anything exceptional now. Everybody shops, or there is sport, everything. I think that generation would be shocked to see how things have changed, but I guess it's inevitable."

Another big change is the number of people attending services.
"There must have been a congregation of 250 or so and now it's down to fewer than 50," she said. Outside the chapel, Jennie has been in demand as an accompanist for the likes of Skewen Choral, the Gwyn Thomas Choir in Neath and the Morriston Orpheus, with whom she spent eight years from 1961.

"Being with the choir was quite a learning curve, and the pace was hectic with three rehearsals a week and concerts galore," she said. "They had a great sense of humour and I was always treated with respect. They were always ready to help.

"But the stress of trying to do too many things at the same time became too much. I have always kept a keen interest in all that the choir does. I look at my time with them as an important and enjoyable part of my life."

Her working life saw her as a music teacher at St Christopher's School in Burnham-on-Sea, Somerset, for three years before returning to Swansea to work in the Guildhall in education for six years, and later as the head teacher's secretary at Dynevor Boys' Grammar School, later to go comprehensive. She remembers Archbishop of Canterbury Dr Rowan Williams as a pupil there.
"He was a very clever boy," she said. "He could have gone to either science or art. He was exceptional and was destined for something great."

For her part, Jennie is still happy to be in demand. She does not often miss services.

"I would like to carry on until I fail physically, and you don't know what is going to happen mentally," she said. "There are periods when I don't feel very well. But I count myself fortunate that I am still fairly mobile.

But tomorrow night others will do the work, while she relaxes.
"I think it is a great honour," she said. "I am not sure whether I am worthy of it. I think it is most generous of the choir and the artists to do what they are doing and I shall enjoy it immensely." 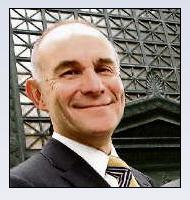 Acclaimed Swansea organist Huw Tregelles Williams and a Vice President of the Morriston Orpheus Choir  thinks it is fitting Jennie Sims's lifetime contribution to music in the area should be marked with a concert in her honour.

The former BBC Wales head of music and inaugural director of the BBC National Orchestra of Wales, said he was proud to be playing tomorrow night.

Last month, he was asked to perform by a relative of hers, Gareth Sims, who added: "By the way, do you know her?"

"I said I certainly did, and that I was one of her greatest fans, because she is always tremendously cheerful and so energetic," he said. "I heard her play the organ for Morriston Orpheus when I was probably a schoolboy - it was in Tabernacle in Morriston.

"And she could play. There is no question. It was all absolutely there and in place. I bump into her now at occasional concerts. She is always so smart, so elegant and full of life. And it's hard to believe she is the age she is. It will be nice for her to sit back and watch other people struggle on Sunday."

Mr Williams, who chairs Swansea's Festival of Music and the Arts, added: "I think it is great to be able to pay tribute to somebody who has given so much musically to the area over so many years. I think we shouldn't ignore contributions like that. They are very precious.

"She has played for choirs. She has taught people. She has done an awful lot."