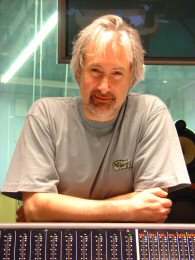 David began his career as a professional composer in 1986. His musical training included playing the trombone in the National Youth Orchestra of Great Britain and gaining his BMus Hons (Tonmeister) degree from the University of Surrey, where he also won the Joyce Dixey Prize for Composition. After graduating, David worked for five years as a sound editor. Initially, his work as a composer was in the corporate and commercial sector but by the late 1990s had developed to include scores for television and feature film.

His scores for wildlife films have been recognised at a number of major international film festivals.
David orchestrates and conducts all his scores and performs on a variety of instruments. His wide experience enables him to compose in many genres from classical orchestral and choral music to jazz, blues, folk, ethnic music and contemporary electronic music.

David is based in Wiltshire in the UK where he has facilities for recording and mixing in 5.1 surround if required. In partnership with his wife Sue he can offer a complete music production service for film and television scores.