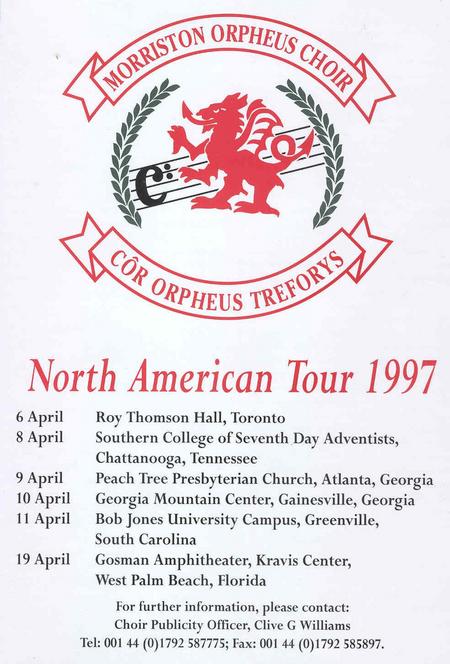 Canada
Toronto
The whole party stayed at the Holiday Inn

5th April ~ Optional excursion to Niagara falls and Niagara on the Lake.

7th April ~ Flew from Toronto to Atlanta, Georgia via Chicago

USA
Atlanta, Georgia Stayed at the Marriott International - Fairfield Hotel
8th April ~ Travelled by road to Chattanooga, Tennessee
Concert ~ Southern College of Seventh Day Adventists
As the name implies, we sang before a very religious audience. The organisers requested that the ladies in our party wear dresses which were below the knees, which had no splits and had high necklines. Also that no alcohol be taken into or consumed on the premises. We returned to Atlanta after the concert (very dry). Whilst there visits were made to the Olympic Stadium, Martin Luther King's Centre, his tomb and the church where he and or his father had been pastors.

9th April ~ Concert ~ Peach Tree Presbyterian Church
Organised by the St David’s Welsh Society of Georgia.
During the concert one of our choristers collapsed on stage as we happened to be singing “Where shall I be when the last trumpet sounds?” He wasn’t seriously ill. He hasn’t lived that down.

10 April ~ we travelled by road to  Gainesville, Georgia
Concert ~ Georgia Mountain Centre
We were impressed to read that the Music Director of the local university, wearing the hat of the music critic of the local paper, considered that the quality of our singing compared with that of Robert Shaw’s professional choirs of the 1950’s. We returned to Atlanta after the concert. Read the concert programme. 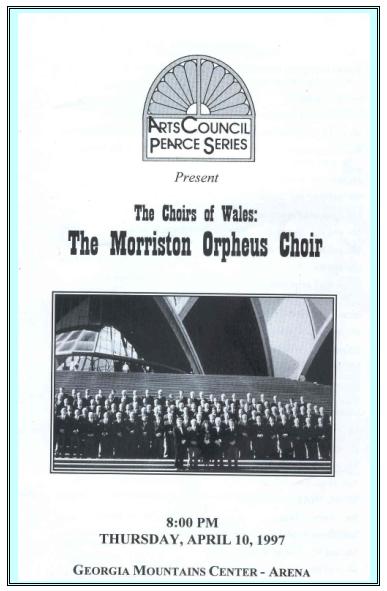 11th April ~ We travelled by road to Greenville, South Carolina
Our party was hosted for lunch at a local golf club by the American Section of Morganite. Their Managing Director happened to be a Morristonian who started his working life at Morganite in Morriston
Concert ~ Bob Jones University Campus
They had the same rules as the organisers of the Chattanooga concert
We returned to Atlanta after the concert (again very dry)

13th April ~ We flew from Atlanta to Miami and travelled by road to Orlando, Florida. We stayed at the Best Western, International Plaza. Photos from Ray Smith. 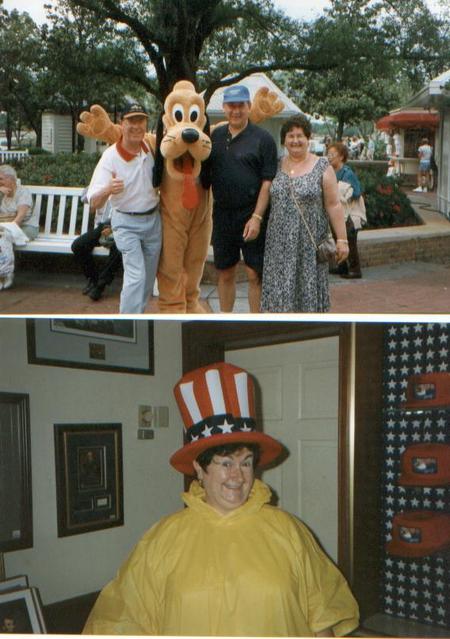 14th, 15th, 16th and 17th April ~ We were free to enjoy the numerous attractions provided in this part of the world. There was something there for kids of all ages.

18th April ~ Back to work. We travelled by road to West Palm Beach, Florida and stayed at the Best Western Hotel. Photos from Ray Smith. 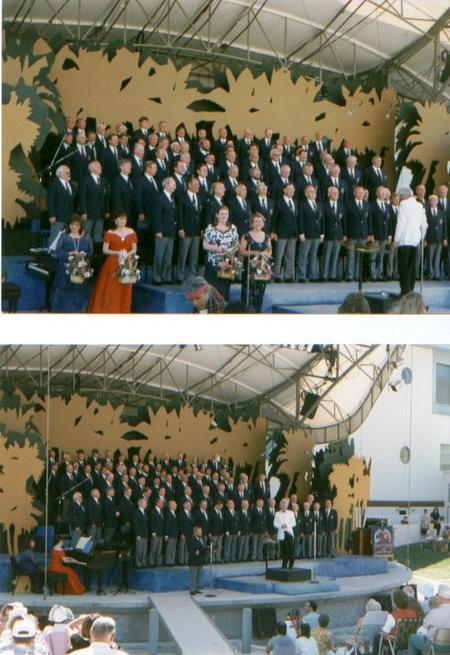