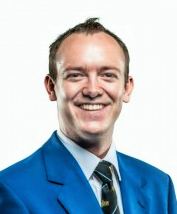 Originally from Anglesey, Ieuan moved to Cardiff to study music at the University of Cardiff, where he received an honours B.Mus degree. During his studies, he became an organ scholar at Dewi Sant church and is now Musical Director and choirmaster there. He was offered an opportunity to be the accompanist of CÃ´r Aelwyd y Waun Ddyfal, during his seven years with the choir they won several first prizes at the Urdd Eisteddfod, the National Eisteddfod and last year they were named the best youth choir in Wales by winning their category in the Choir of Wales competition. Ieuan conducted the 'Lions' Male Choir which travelled to New Zealand in 2017. His other musical interests include playing the ukulele, and entertaining audiences with his talent as a yodelle