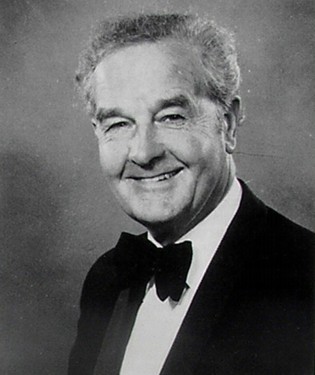 Eufryn John was the Musical Director of the Choir between 1961 and 1969.

He commenced his musical studies at an early age and continued to specialise in this subject at Dynevor Grammar School in Swansea, where he matriculated gaining a distinction in music. While still in his teens, he gained the ATLC Diploma in Organ Playing and Teaching, and the LRAM Diploma in Pianoforte Accompaniment, and shortly afterwards the ARCO Diploma.

His association with Male Voice Choralism commenced at the age of 14 when he accepted an invitation to accompany a Glee Party and during the period before World War II he was Deputy Accompanist and Deputy Conductor to the renowned Swansea and District Royal Male Choir.

At this time he was frequently invited by Mr. Ivor Sims to act as guest accompanist at the concerts organised by his newly formed Orpheus Choir - such was the happy relationship that existed between the two 'rival' local choirs

Whilst serving with H.M. Forces during the war years, Mr. John became attached to an Army Concert Orchestra and further enhanced his musical experience by scoring numerous arrangements for this combination.

For some time after the war he studied Advanced Counterpoint and Choral Technique at the Birmingham and Midland Institute, and in 1949 he entered the Teaching Profession, specialising as a Music Master in Swansea.

He returned to the world of Male Choral Singing in 1958 when he was invited to act as accompanist and Deputy Conductor of the Morriston Orpheus Choir.

He took over as Musical Director following the death of Ivor Sims in 1961.