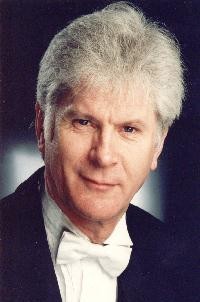 'A legend - not only a credit to the world of music, but to the Welsh nation.'

So said The Secretary of State for Wales, The Rt Hon Peter Hain MP about Alwyn Humphreys who in January 2005 stepped down after 25 years as Musical Director of the Morriston Orpheus Choir. In recognition of the outstanding contribution he had made during that time, the choir conferred on Alwyn the title of Conductor Emeritus in March 2005.

During his time as Musical Director Alwyn conducted 623 concerts, made 28 recorded albums (three of which won 'Best Choral Record' awards, with another two gaining Silver Discs), made countless TV appearances, and travelled extensively with the choir to France, Germany, Italy, Poland, Spain, Canada, the USA, Taiwan, New Zealand, Australia, and most recently the United Arab Emirates and Oman. Among the most notable performances were ones at Carnegie Hall, New York and the Sydney Opera House, both concerts achieving 5 standing-ovations.

Born in Bodffordd, Isle of Anglesey in North Wales, where his father sang tenor in the local male choir and which his uncle conducted, Alwyn was Principal Violist of the National Youth Orchestra of Wales before graduating with honours in music at the University of Hull and Trinity College London.

Alwyn was created an MBE in the Queenï¿½s 2001 New Yearï¿½s Honours List for services to music in Wales, and awarded a Doctorate in Music by the University of Hull in June 2006.

Since leaving the Morriston Orpheus, Alwyn has been guest-conducting at various massed male choir concerts, as well as televised events such as the Bryn Terfel Faenol Festival. He also regularly appears with the National Chamber Orchestra of Wales in their monthly candlelit concert series. He continues to combine his conducting career with that of presenting TV programmes and televised events, including the National Eisteddfod and the Llangollen International Eisteddfod. He also regularly introduces concert broadcasts by the BBC National Orchestra of Wales.

His autobiography (Yr Hunangofiant) was publshed by Y Lolfa in May 2006..