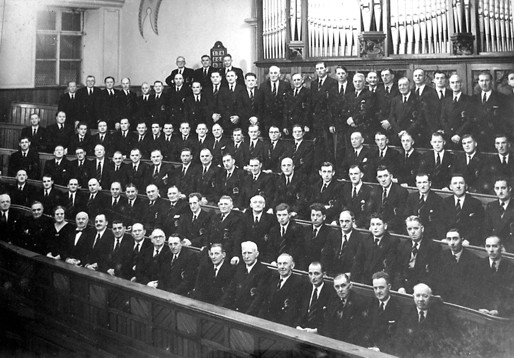 The Orpheus Choir in 1957.
This photograph was taken prior to the Choir's performance at the Royal Command Performance at The London Palladium, November 18th, 1957.
Press Release

After the heartbreak of last year’s Suez-cancelled performance, the Morriston Orpheus Choir returned triumphantly last night to the Palladium for the Royal Variety Performance before the Queen, the Queen Mother and the Duke of Edinburgh.

Dressed in miners’ helmets, boiler suits and overalls, the 101-strong choir collected one of the biggest ovations of a star-spangled evening with their two songs, “All Through the Night”, and “We’ll keep a Welcome”.

Harry Secombe, the Welsh Goon with the golden voice introduced the choir.

After singing “ On with the Motley” he gave the famous Goon Giggle, cleared his throat and announced: “Now for some culture.”

The curtains parted and the choir stood posed against a black backcloth depicting the Welsh Hills. “I’ve brought a few of the lads along,” said Secombe. “I know them all by name. Listen. “Are you there Dai Jones?” Roared back the choir in unison, “Aye”.

The group then went on with their first song and were later joined by Harry Secombe for the “We’ll keep a Welcome” number.

The audience, which up to the choir’s performance early in the first half had been sparing with their plaudits, gave them the first genuine applause of the evening.

Today, secretary of the choir Mr. David Jones, said: “Last night’s reception more than made up for the disappointment we experienced over last year’s cancelled show. I know the chaps were really thrilled at performing before the Queen. “None of us was presented to the Queen because there was not time for her to meet all the members of the cast. After the show we stayed on for a reception given to the cast.”